Cannabidiol, more commonly called CBD is a compound derived from the cannabis Sativa plant. Cannabis has been around for centuries. CBD is different, it has many healing properties and does not act like its stepbrother, THC. In other words, CBD doesn’t get you high. 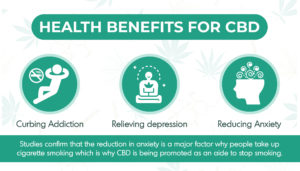 The health benefits of CBD are numerous. It has been approved by the FDA for some forms of epilepsy. Other benefits include curbing addiction, relieving depression, and reducing anxiety. Studies confirm that the reduction in anxiety is a major factor why people take up cigarette smoking which is why CBD is being promoted as an aide to stop smoking.

Here’s why. Nicotine is reported to reduce anxiety. But with nicotine, the effect only lasts while the cigarette is being inhaled. Unlike CBD, nicotine causes a dependency. The smoker only enjoys the calming benefit while smoking. When not smoking withdrawal sets in and the reduction of anxiety disappears. CBD’s benefits have been reported to last 2 to 3 days. There is no dependency and therefore there is not an addiction. In fact, thwarting the nicotine habit is believed to be one of the potential benefits of CBD.

The potential of using CBD to kick the butt has been of interest to smokers for quite some time. Recently we conducted a study to determine the effectiveness of CBD when it came to smoking cessation. There were 199 participants in the study who were recruited via social media. The participants ranged in age from 25 to 55 years old. Both women and men took part in the study.

Out of these 199 smokers who took part in this study, 35% were able to abstain from smoking. Upon reviewing the results, it was noted that the percentages of those who succeeded varied among the age groups and genders.

Since this was a 1-month study, we were able to analyze the long-term effect of CBD on smoking cessation. We found a significant difference between the studied age groups.

The difference in usage between the age groups was more prevalent among the younger demographic. But the oldest demographic we surveyed also had a significant decrease in smoking after a month. In fact, they were closed on par with the youngest demo. The middle demo, 36 to 45-year olds fared the worst.

The statistical reason why there were more men in the CBD study than women is based on the percentages of average tobacco usage among the genders. One billion people, or 20% of the world’s population 18 and over smoke. Most of these smokers are men. There are 800 million men smoking in the world. In the U.S. 13.7% of adults 18 and older smoke. And in the UK, where this study took place, 15% of the adult population smoke.

The percentage of men smoking in the UK is 18% while women only make up 12% of smokers. This would account for the discrepancy in the number of women vs men who volunteered to take part in the CBD study.

Should CBD Be Studied for Smoking Cessation

We previously discussed the calming benefits of CBD compared to nicotine. But the main reason to pursue studies using CBD to abstain from smoking is the lack of addiction. CBD is known to relax an individual and reduce anxiety. Reducing anxiety and relaxing is the main motivation for why people use tobacco products. Giving a smoker the option to inhale CBD when the “urge” hits may be a viable alternative to smoking a dangerous item like a cigarette. Tobacco kills 7 million people a year in the world. That figure is expected to jump to 8 million by 2030 according to the U.S Center for Disease Control. 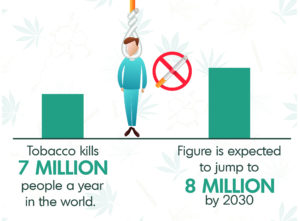 CBD should be studied to give smokers a viable alternative to the addictive nature and the harmful carbon monoxide that cigarettes produce. Preliminary results from our CBD smoking study show that positive results are not only possible but likely. 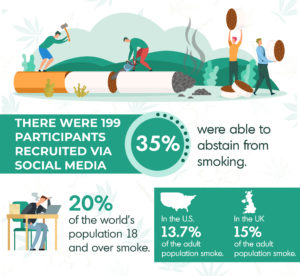 The study took place for one month. Participants were permitted to inhale the CBD. After a month of using CBD 35% of participants between the ages of 25 and 55 abstained from smoking. This far outperforms traditional cigarette cessation methods. According to the US Center for Disease Control, less than 10% of smokers were able to quit using traditional methods last year. Considering that 70% of smokers expressed the desire to quit, this number is dismal. Inhaling CBD helped those who wanted to abstain from smoking. CBD greatly increased the chance of success. Although considered controversial from some naysayers, CBD has already shown itself to be a viable option to use when kicking the butt. 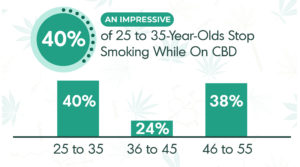 There was a discrepancy in ages when it came to kicking the habit. The study was divided into three age brackets; adults 25 to 35, 36 to 45, and 46 to 55 years old. The youngest demographic of 25 to 35 had the most success when it came to quitting cigarettes. In this same age bracket, 40% of the people using CBD were able to abstain after one month. This was much higher than with traditional methods.

When looking at these results, one would think that the middle age group, 36 to 45, would be the next in line to succeed when it came to quitting. But this was not the case. This age group came in last. The surprise factor hit us when we looked at the older demographic. It’s interesting to note that the 46 to 55-year-old age bracket was almost even with the youngest group. This oldest age bracket had a 38% abstinence rate. The younger and older demographics were more likely to abstain from smoking when taking CBD. This contrasts remarkably with the middle group of 36 to 45-year-olds.  Abstinence with this age bracket was only 24%. That is a stunning 2 to 1 difference in tobacco usage compared to the two other age groups. 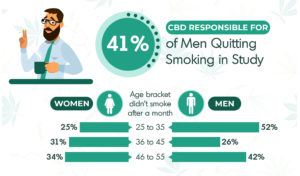 There was a major difference between men and women in long term tobacco usage over the course of the month. In the overall demographic of 25 to 55 adults, 41% of the men were able to abstain by using CBD as a replacement for smoking. The percentage of women was slightly lower. Using CBD, 30% of women were able to refrain from smoking during that same month.

The most remarkable difference between the genders was in the 25 to 35 age group. While taking CBD, 25% of women in this age bracket didn’t smoke after a month. This is above the US national average in quitting. But the amazing result was with the 25 to 35-year-old men. In this age group, 52% of participants did not smoke after taking CBD for one month. Clearly, CBD was a major factor in smoking abstinence. The success rate of using CBD was 5 times greater than the traditional methods for these men.

As part of this CBD study, we measured weekly results with all genders and age groups. We tracked what percentage of smokers picked up a cigarette weekly during the study. The first two weeks had numbers that fluctuated greatly in all age and gender groups. 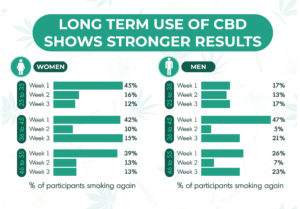 For instance, in women 25 to 35, the first week showed 45% of participants smoking again. But the second week only showed 16% smoking again. Finally, the third week had only 12% of volunteers picking up a cigarette. This may be due to the need to have CBD used long term. The longer the women inhaled CBD, the more it worked in their smoking abstinence. The results were similar for the 26 to 45-year-old group. The first week 42% resumed smoking and the second week only 10% smoked again. Finally, the third week found that 15% of the volunteers picked up a cigarette. The older female age group compared similarly to the first two. The 46 to 55 demographic had 39% smoking again in the first week with 13% smoking in the second week. This age group reached a plateau the third week and once again only 13% of this faction smoked. It appears that the longer CBD is used by women, the more beneficial and long-lasting the treatment.

The male results were quite interesting. Although positive, they fluctuated based on the age bracket. Over a three week period, the results for men 25 to 35 were flat when it came to picking up a cigarette. The first week men resumed smoking at a rate of 17%. The second week it went down to 13% and rebounded to 17% in the third week. The interesting part was the consistency of the numbers over the study weeks.

Moving onto the next age group, it was not a surprise to see the erratic numbers of the 36 to a 45-year-old age group based on prior data. In the first week, men in this age bracket started smoking at a 47% rate. However, the drop was substantial for the second week. Only 5% of men used tobacco again in the second week. This was a major drop from the previous week. And finally, 21% of men started smoking again after the third week. Based on the overall findings of this age bracket, more studies will need to be done on this demographic to determine the nature of these disparities.

With the older male group, 46 to 55, there was an erratic up and down cycle. The first week 26% picked up a cigarette, while the second week only 7% resumed smoking. Interestingly, it jumped again the third week with 23% of men starting to smoke again.

Clearly, the large overall number of men who kicked the cigarette habit was due to the younger male age bracket’s participation. They apparently embraced the usage of CBD.

The study showed that men were more likely than women to abstain from smoking when taking CBD. After four weeks, 41% of the men had abstained from smoking. And although the percentage for women was double-digit, it was still less than men. By the fourth week, 30% of women had put down cigarettes. That’s a 132% difference.

In the 25 to 35 age group, 52% of men had abstained whereas in the same group 25% of women had abstained. That’s a significant difference. But it must be noted that in the erratic 36 to 45 age bracket, 26% of men abstained as opposed to 31% of women abstaining. And finally, after 4 weeks in the 46 to 55 age faction, the men were back on top with 42% abstaining. 34% of women in that age group kicking the habit.

CBD A Viable Alternative to Smoking

Compared to traditional methods of smoking cessation, in this study CBD shows itself to be the more effective vehicle to abstain from smoking. CBD significantly reduced smoking in all three age groups that were studied. Both women and men benefitted by using CBD. These results combined with the popularity of CBD establishes it as a viable alternative to smoking. More CBD studies are necessary to determine not only its effectiveness but its long term effect on smokers.