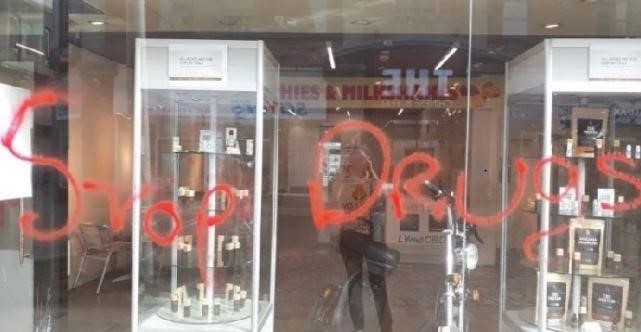 A CBD store was trashed by anti-drug vigilantes. It appears they were confused as “STOP THE DRUGS” was found written over the glass window.

The manager of the store, Joanne Thompson, was shocked when she found the store in this condition. The windows were broken and the text was sprayed on them. She said, “I was phoned by a friend in the morning to tell me what had happened and I thought they were joking.”

Ms. Thompson definitely wasn’t expecting anything like that to happen to her store as Cannabidiol is totally legal in the UK. She further added to her statement, ” I couldn’t believe it when I turned up. They had also super-glued the lock and smashed our windows. It’s just mindless because it is totally legal, and government-approved.”

She thinks the store was targeted by the vigilantes who believe CBD is an illegal drug. The whole case appears a bit complicated. But it is for sure that the vigilantes got confused and trashed the door. They didn’t know that Cannabidiol is legal in the country and doesn’t cause addiction neither is bad for health.

CBD is short for Cannabidiol, is basically a chemical compound. It is derived from the cannabis plant. It’s a natural substance so you are practically safe from any chemical reactions. It is not known for any adverse effects on the consumer and was declared legal by the government in the UK.

The good part about the drug is that it doesn’t cause addiction and doesn’t get the consumer high. It is known to relax and calm its consumer. However, another derivative of this drug, THC is illegal. The cannabis plant has two species hemp and marijuana. CBD is derived from hemp which has THC in very low concentration (Less than 0.3%). It is safe to consume THC in such a low concentration. But in the case of marijuana, it is not so. It is illegal and hence not used to derive CBD.

CBD legal in the UK

In 2018, the drug was declared legal in the country. It is legal to possess, buy or sell it without any license. It is used to treat problems like pain, anxiety, and insomnia. This is what’s bothering the store manager, Ms. Thompson the most. She further shares her views on the matter by saying, “It’s a supplement, they sell it in Holland and Barrett. So why have they just targeted us? It could be £600 or £700 for a new window too. It’s just down to ignorance.”

Her concern is valid and it would bother anybody. The store wasn’t selling anything illegal or harmful. This is the reason the store manager feels targeted. It is a big setback to the store as it is a big financial loss and that too without doing anything wrong.

The drug is known for a number of health benefits. It makes the case even worse as it is good for the consumer if prescribed. The vigilantes sure did a mistake here.

A CBD medication that is most common and is approved by the FDA is Epidiolex. It is used to treat epilepsy. Apart from this, it is used to treat patients facing anxiety issues. The drug is known to relax the consumer in a very short time and is currently used in the UK commonly.

The drug has a number of benefits apart from these. The best part is that it is natural and doesn’t have any known adverse effects. Even WHO approves the drug.

This makes the case even worse. The store manager thinks that the vigilantes mistakenly confused it with some other drug. But a simple mistake made her face a huge financial set back. Nobody knows what exactly happened. For all we know, some rival could be involved. Be it anything, what’s done can’t be undone. The store has to bear the loss now.